Great Days and Nights at Camp 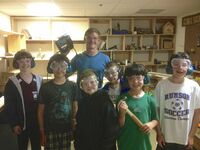 The weatherman warned us that today was going to be a complete washout. Thankfully, he was totally wrong and we were able to have a great day outside playing sports, going on adventures, and more. After a morning of all-camp photographs I watched our kids in both camps use their free time to play Frisbee, Basketball, Ping Pong, Soccer, Running Bases and more. Later on our Freshmen Girls had their first Tennis lessons of the summer, and they couldn’t wait to tell me how fun it was. Our Seniors finished their auditions for our big musical production of “Joseph and the Amazing Technicolor Dream Coat”, while the Kenwood Sophomores went on a nature hike to find salamanders and frogs. Evergreen Inters got behind the waterski boat for the first time, and also did some tubing. There were tryouts for basketball, baseball and soccer teams, and in Arts & Crafts kids were making candles, paper mache masks and learning to tie friendship bracelets. Campers were discovering how to cook baked stuffed apples or properly use tools in the Wood Shop.

In the afternoon our Evergreen Juniper Girls gathered for the first time with their Camp Little Sisters. There were introductions and icebreakers, and eventually a hysterically fun game of Kickball. The Big Sisters who were not at bat were accompanied by their Little Sisters, and at one point there were over 40 people standing in the outfield and infield! There was wonderful laughing and bonding and it was clear that quickly both groups had grown enamored with one another.

As I left the Kickball game I saw that the Kenwood Freshmen were ending a period. Rather than simply walking back as a group, their Unit Leader had them form a circle, hold hands, and do one more icebreaking game to help everyone connect with each other just a little more.

Dinner was delicious and included brisket, egg noodles, roasted summer squash, and a wild mushroom pasta for our vegetarians. The salad bars were filled with fresh fruit and vegetables, along with sliced turkey, (sesame oil free) hummus, tofu, and three different types of cheese!

Tonight in Evergreen was an event called “Peanut Pals”, which is a rather interesting name, considering that we are a peanut free camp!  Peanut Pals is a great night-time tradition that goes back to the founding of Evergreen, and is a way we help every girl in camp get to know everyone else. At the start of the day each member of the Evergreen community picked someone’s name out of a ceremonial green and gold bucket, and that person became their “peanut pal”.  Throughout the day the pal left her new friend little notes of kindness and encouragement, and clues as to her secret identify. After dinner, all of Evergreen gathered in the theater and the Peanut Pals were revealed in a big ceremony with lots of cheering and camaraderie. It’s always a great way for our new and veteran members to get to know each other, and have a little fun!

In Kenwood, the boys had their first Capture the Flag game of the summer. At K&E we pride ourselves on doing things a little bit differently, and our style of Capture the Flag is a great example. The field we call the Hollow is divided in half, and our Athletic Director Bob paints five white circles on each side. In each circle is placed a brightly colored foam flag, worth 5, 10 or 25 points. So that everyone playing has a chance to contribute to the game (and not just the older and faster kids) everyone takes on different and crucial roles. Some kids work in groups, creating strategies for entering circles and safely stealing flags back to their side. Some kids work in pairs guarding their own flag circles. Some kids run in little packs, trying to free their opponent’s jail. Everyone contributes. Watching kids ages 8-15 plot, plan and collaborate during this game is simply fascinating, and a ton of fun to watch.

Just before tonight’s game a light rain fell. Our boys were undaunted by the inclement weather. True to the spirit of Kenwood, they actually reveled in the chance to play this fantastic game while slipping and sliding across the hollow. As I stopped by every bunk in Kenwood Junior Camp all of our veteran campers told me that this was their single favorite time ever playing Capture the Flag, while our new campers all said that it was already a highlight of the summer.