An Anything Can Happen Thursday of Paint Balls, Iron Chef and Karaoke

Thursdays are quickly shaping up to be the favorite day of the week this summer. As I wrote in a blog last week, we recently premiered a new weekly event called Anything Can Happen Thursdays. The idea behind this event is that once a week the kids can come to dinner prepared to be a mix of surprised and wowed by whatever unexpected dinner our Leadership Team has planned. Tonight was definitely one of those nights!

Tonight was “Pub Night”, and everyone on the Dining Hall team got involved. Chef Charles planned a menu of all sorts of delicious finger foods that you might find at a pub or tavern, and placed mugs of Arnold Palmers and flutes of Shirley Temples on the tables. For those who wanted a healthier fare he also created a pasta with steamed broccoli and squash, and ripe blackberries. For our vegetarians he also had Qorn nuggets and black bean burger quesadillas as well. Chef Kimberly made sure there were all sorts of great gluten free and dairy free options, including GF corn dogs!

Truly, though, the hero of tonight’s meal was our baker Kristie. When I ran into her earlier in the day she had on a heavy sweatshirt, pants and winter gloves, and it was at least 85 degrees outside. I followed her into the walk-in freezer where I saw her preparing 500+ ice cream and chocolate chip bar sundaes. She wanted everything to be perfect for the kids and, worrying that things might melt during preparation, was doing all of the work inside our massive freezer (where the temperature was 16 degrees Fahrenheit!). Thank you, Kristie, for your love of the kids and tireless dedication to their happiness! 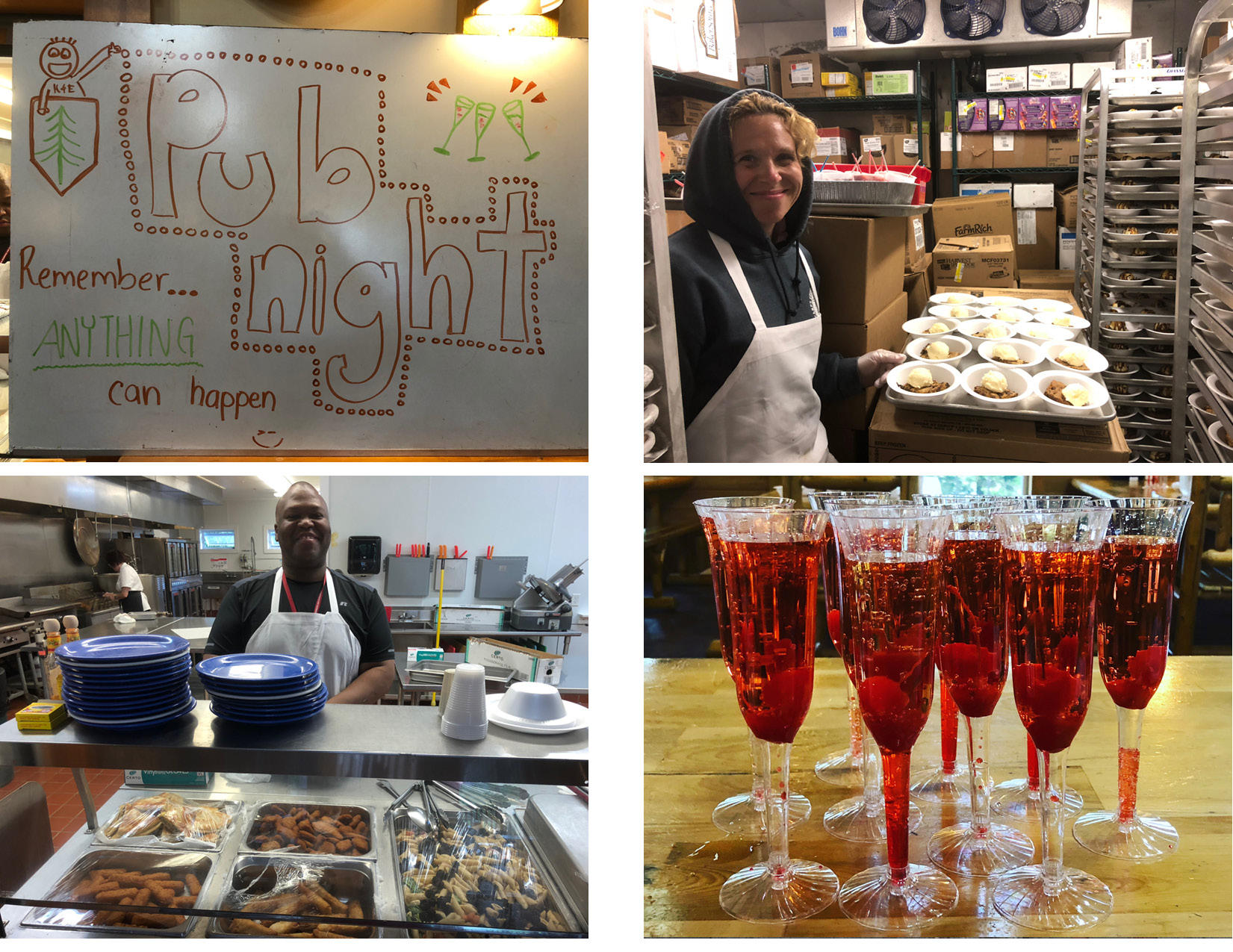 When they walked into the dining hall the kids shrieked with delight when they saw what we had planned for them. To add to this Pub Night theme we also played highlight videos from the last 2 weeks of the World Cup Soccer tournament, allowing them to catch up on the big moments they had missed since the start of Camp.

Learn more about the amazing meals at our overnight camp

As I walked through the dining hall campers of every age said to me either “this is the best dinner of the summer!” or “this is my favorite meal I’ve ever eaten at Camp!” It doesn’t get any better than that! 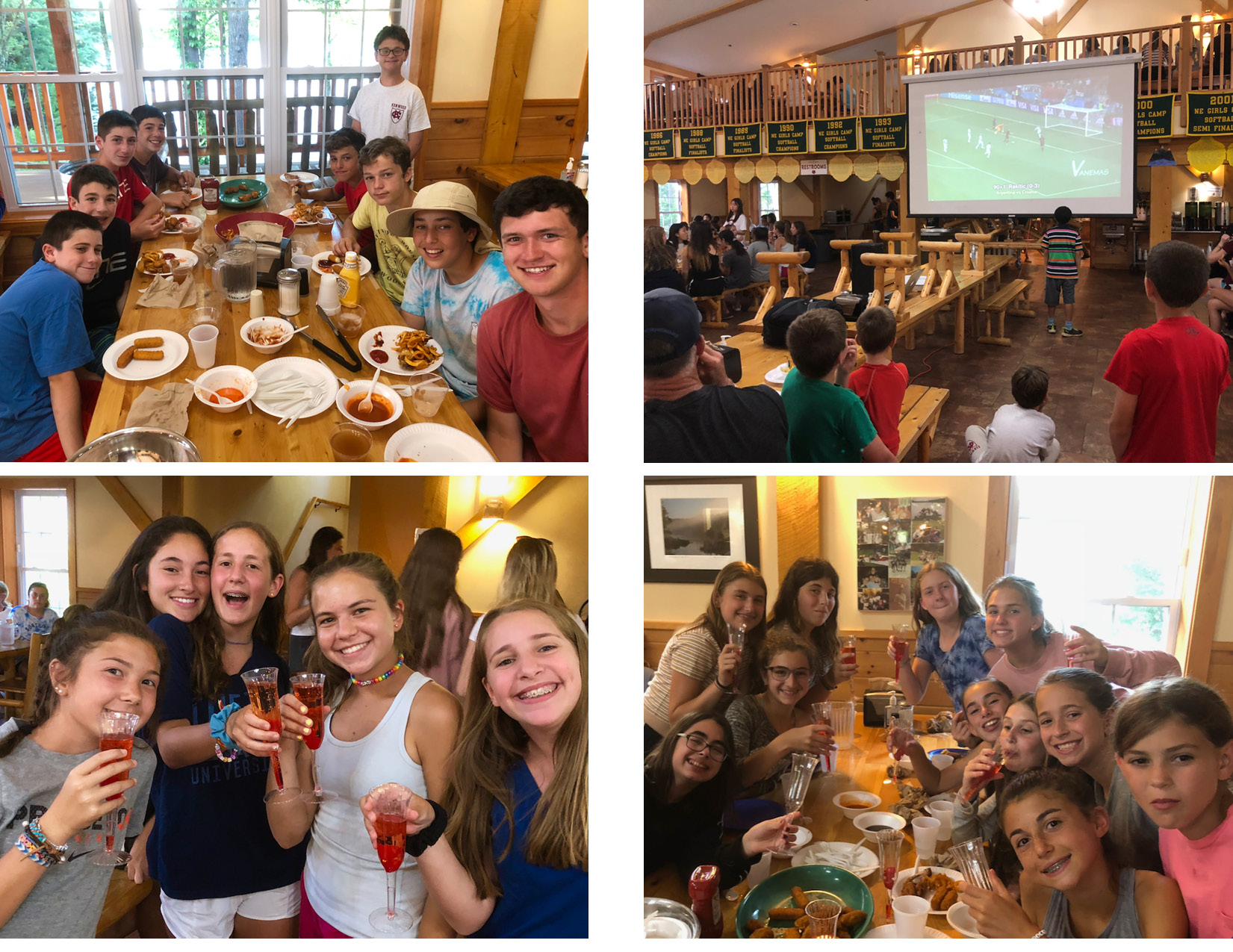 It was wonderful to see our community come together for an event like this, and it pretty much set the tone for the rest of the evening. In Kenwood Junior Camp, tonight was the second round of Watermelon League. This is our boys’ camp’s intramural league, and it’s a chance for kids ages 8-12 to play different sports in a fun and relaxed environment. Last week all of the teams played softball, and tonight some played basketball while others played soccer. Watermelon League is one of the ways we help boys of different ages get to know each other better and feel a part of the Kenwood Brotherhood. Evergreen has its own league called Candy Bar League, which will have games played this coming weekend.

In Evergreen tonight was one of Head Counselor Courtney’s big ideas: Unit Mash Up Night. Like Watermelon League, it was designed to help campers of different ages form deeper connections with one another, but it is all about being as silly as possible. Our Evergreen Freshmen and Juniors gathered in the tent to sing their hearts out at karaoke. Some of the songs were amazing. Some were…not, but all were fun and funny and all about losing yourself in the moment with your Camp sisters. 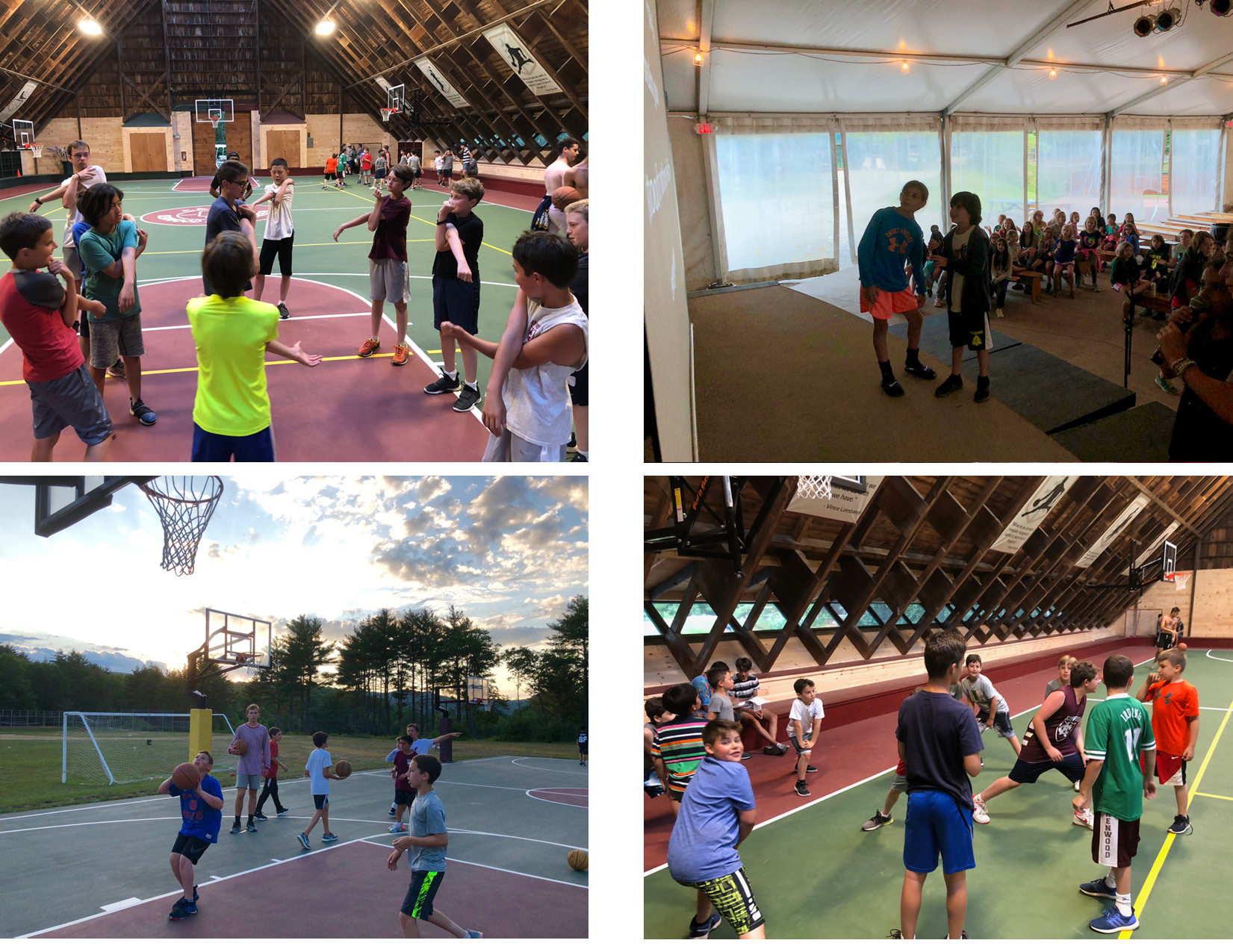 Courtney, Deena and the Unit Leaders set up something very different for the Evergreen Inters and 2nd Year Seniors. They loaded up dozens of buckets with balls filled with paint, and when everyone was ready Courtney yelled “GO!” Shirts that had once been white were suddenly every color of the rainbow, and our girls howled with laughter as they ran around the Evergreen Ball Field dodging these soft little projectiles.

I invite you to watch the paint ball event, which I filmed in slow motion

Afterwards, they sat in a big circle to talk about what Sisterhood means to each of them, and the different ways that Evergreen girls take care of one another. 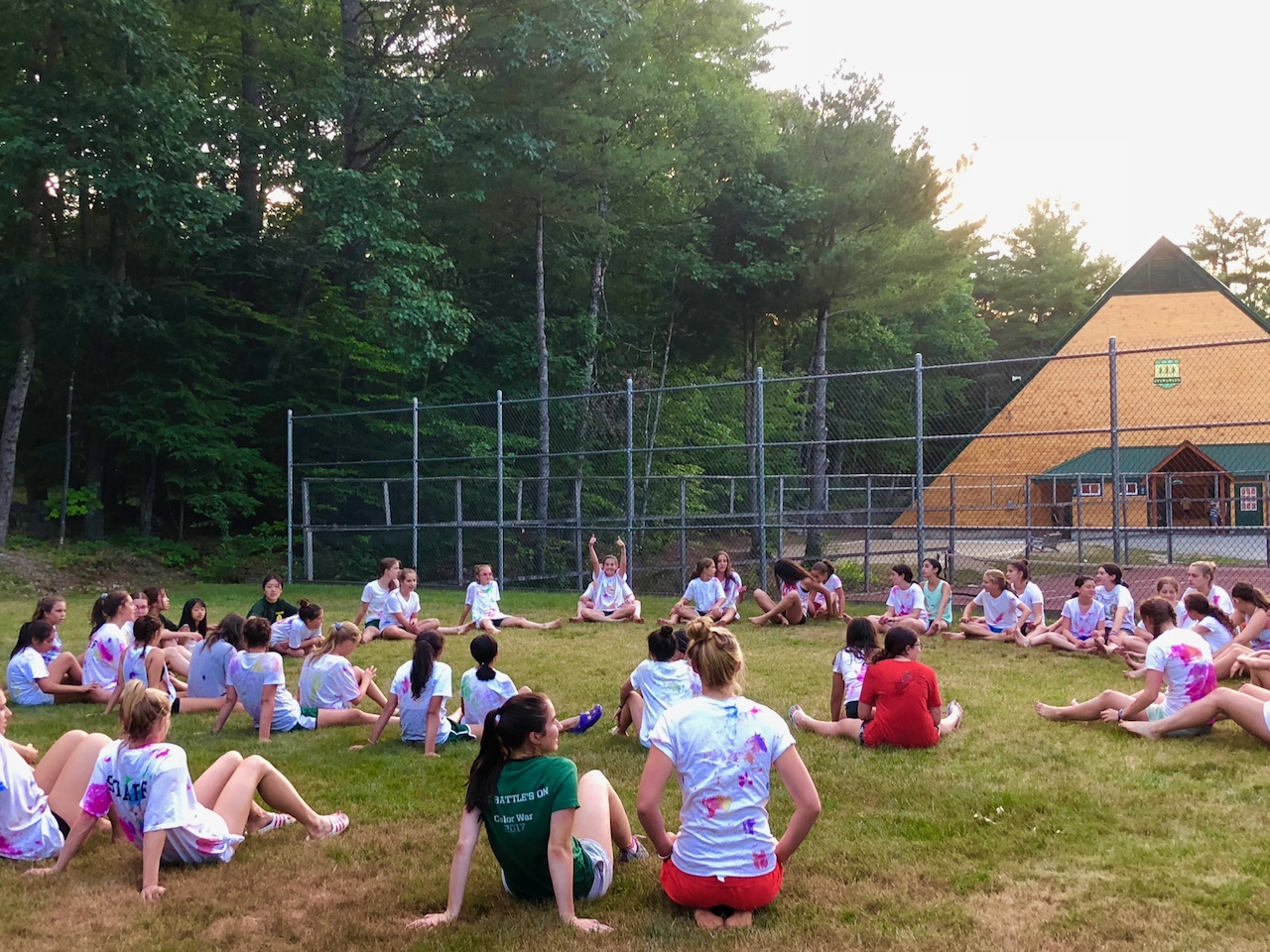 Up on Kenwood’s Senior Hill tonight was also a big night for community and brotherhood, as the evening activity was the 10th annual Iron Chef Competition. For one hour each of our 13 and 14-year old boys’ huts worked together to strategize, plan a menu, and come up with the best tasting hamburgers that they could create. While presented with dozens and dozens of ingredients to choose from, each team had to use at least 5 and no more than 12. The Teams were judged on hygiene, presentation, creativity, team cohesion, and most importantly, taste. Of course, “Celebrity” judges were announced at the start of each event. Tonight our panel consisted of Senior Unit Leader Justin, our two Head Counselors Josh and Sean, an assortment of general counselors, and Chef Charles. 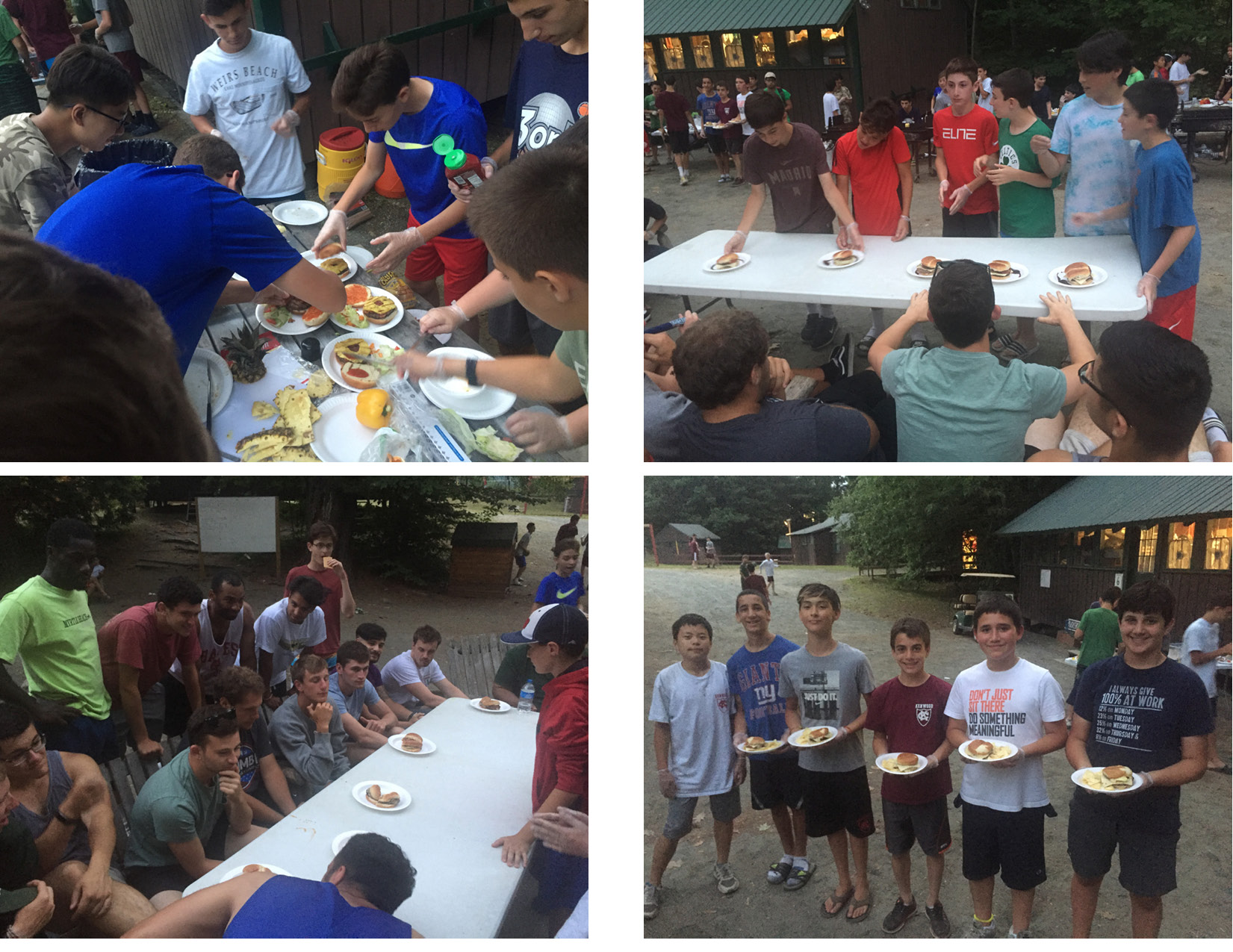 For the first time ever TWO teams were selected as winners — one from each age group. Later this summer both will compete against teams fielded by our Hut 6 boys in the hopes of winning the much desired Golden Spatula award.

The last bonding event of this busy Thursday evening was when Deena, Jacki and Courtney took our Evergreen 1st Year Seniors out for a night of pizza. As Deena and Jacki drove the buses the girls sang their favorite Camp songs at the top of their lungs, and spent the entire meal gabbing and laughing and retelling their favorite stories from their many summers as Evergreen girls. A very good time was had by all.

This was quite an evening here at our summer camp, and one all about helping every camper feel like they are a valued member of a fun, caring, and silly community. This was definitely our most successful Anything Can Happen Thursday yet, and we can’t wait to show you what we’ve got planned for next week!

I’d like to learn more about this sleep away camp!

Camps Kenwood and Evergreen is a brother-sister summer camp for boys and girls ages 8-15.