Very Happy Campers | Day One Of The Summer

Today was the first full day of the summer of 2014, and everywhere I went I saw happy campers. To be exact, I did not encounter a single homesick or sad camper the entire day! As you can imagine, that’s a pretty remarkable fete for the first day of a camp season. 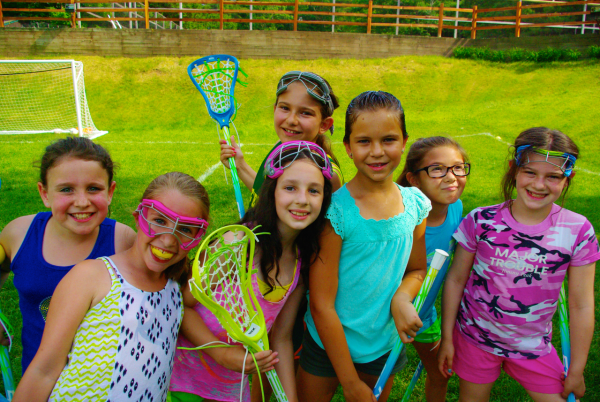 This seems to be a summer with many great changes: a new sports field, new docks at both waterfronts, a new inflatable ride in the middle of the lake called The Rocket, and even a new stegosaurus at the 3-D archery range. This morning we also began a new experiment with how we start our days. Based on some very compelling research that we read this spring, we felt that it was important to give our older campers some extra sleep time in the mornings. So we woke up our Junior Campers at their normal Camp wakeup time, and had them go straight into breakfast. 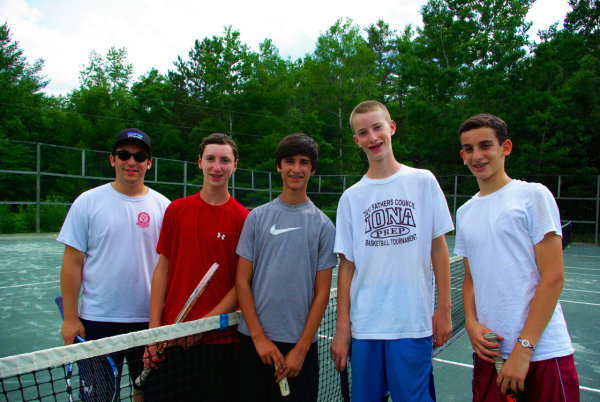 Our senior campers were able to sleep an extra half hour, and then join Junior camp for our traditional morning assembly. From there they went to breakfast, and our younger campers went back to the bunks to cleanup and prepare for the day. While the older campers were eating breakfast each junior camp unit had a morning meeting to discuss the activities of the day, upcoming trips and tournament tryouts, and even do some ice breaker games to help everyone feel more bonded to each other. It was the maiden voyage for this new schedule, but campers young and old all told us that this new plan made them happy. We’ll see how the experiment goes over the coming weeks! 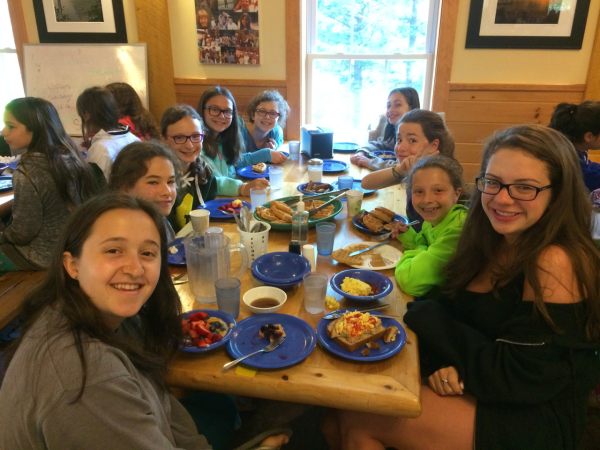 Breakfast was particularly good this morning. Chef Leonard and his team put out hot waffles with homemade strawberry and blueberry compote, along with whipped cream. They also served turkey sausage, scrambled eggs and homemade oatmeal. Lunch was fajitas, complete with grilled flank steak, black beans and grilled vegetables. Dinner was a vegetable lo mein, grilled chicken in a gluten free teriyaki sauce, steamed vegetables and baked spring rolls. Everyone is talking about how great the food is this summer! 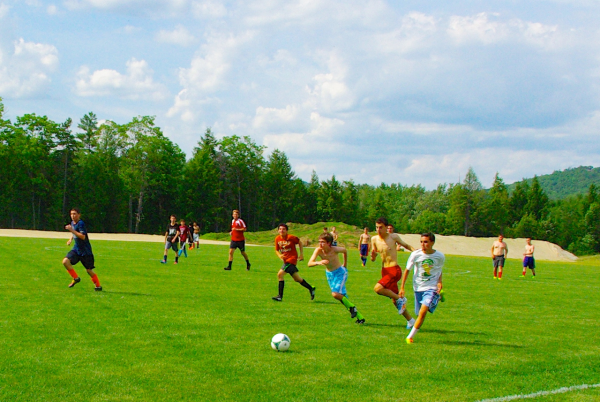 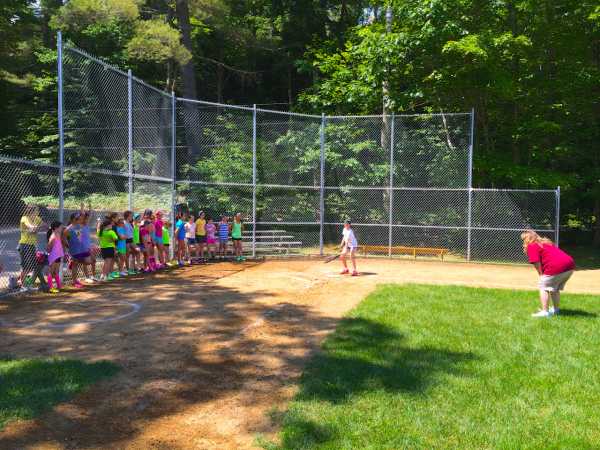 As I walked around campus today I saw fantastic periods and campers really enjoying themselves. Our senior boys were out on the Field of Dreams the second activity call blew. They were thrilled to be the first campers to play soccer and football on this amazing new surface. I saw girls learning to play lacrosse and tennis, and boys practicing for the 12-and-under baseball team.

Both of our basketball coaches had dozens of kids out on the court, working on their ball handling skills, while Jacki and Bob (our athletic directors) were teaching our youngest campers the fundamentals of hitting and throwing. Kids were batting in the batting cage and forming bands in the music room. 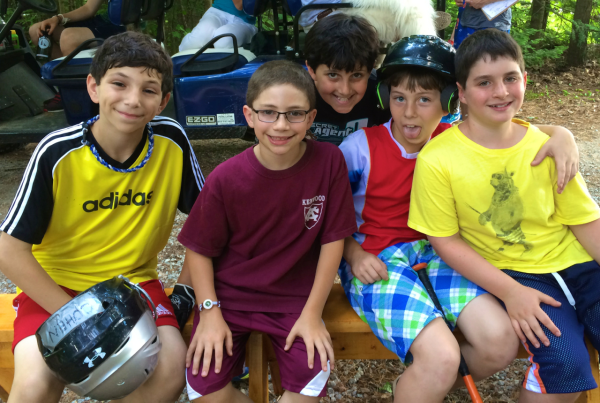 Our new head of cooking was teaching campers how to modify recipes and make delicious smoothies with milk, ice, or yogurt. In the film lab campers were already generating ideas for the new weekly online Kenwood and Evergreen Newscast, while our freshmen and sophomore girls had their first play practice (FYI, their play is going to be “The Wizard of Oz”. It was just such a busy, happy, fun, exciting, energy-filled day up in NH!

Tonight, after Free Play, Evergreen had its annual opening ceremonial campfire. Lead by our eldest campers, who are known as Juniper, our girls and young women sat together in a circle under a wooden canopy, looking out over our beautiful lake. They took turns discussing what it means to be a member of this community and the virtues that we hold dear. As part of Evergreen’s traditions, new and returning campers were asked to stand up and read poems, light candles on the ceremonial Evergreen tree, and lead some of our favorite songs. More than anything else, the goal of the campfire is to help every new member feel welcome and invited into this powerful sisterhood, and remind our veterans of what is expected of our community’s members.

While Evergreen was having a quiet, pensive evening together, in Kenwood it was all about running, passion and excitement. Kenwood’s traditional first night event is our special version of Capture the Flag, and it really is something to see. The field we call the Hollow is divided in half, and our Athletic Director Bob paints five white circles on each side. In each circle is placed a brightly colored foam flag, worth 5, 10 or 25 points. So that everyone playing has a chance to contribute to the game (and not just the older and faster kids) everyone takes on different and crucial roles. Some kids work in groups, creating strategies for entering circles and safely stealing flags back to their side. Some kids work in pairs guarding their own flag circles. Some kids run in little packs, trying to free their opponent’s jail. Everyone contributes. Watching kids ages 8-15 plot, plan and collaborate during this game is simply fascinating, and a ton of fun to watch. As is often the case, tonight the score went back and forth over the four quarters. As they awaited the final score no one was really sure who had ultimately won. It was announced, and after brief cheer and a lot of handshakes everyone walked back to the bunks, most with their arms around someone else.

Today was about as good a first day of the summer as I have seen. As we put the bunks to bed I heard and saw very happy campers throughout the campus. Good night, and more tomorrow!

Do you wonder how your child will learn to step outside his or her comfort zone? Are you searching for a summer camp community that will teach them crucial life skills like adaptability, resilience, and an appreciation for the arts? If so, we invite you to learn more about Camps Kenwood and Evergreen in Wilmot, NH.