On Tuesdays we like to profile our summer camp’s talented coaches and teachers. During our 7-week program each summer they not only help our campers acquire new activity skills (e.g., learning to catch and throw a baseball; fashioning a dovetail in the wood shop; becoming a better point guard), but also help them further develop their non-cognitive/21st century skills. These skills include creativity, follow through, leadership, independence, effective communication, problem solving, and the ability to collaborate in groups. Our summer camp in New Hampshire focuses on teaching these skills because business leaders and researchers across the globe recognize them as the key character traits young people will need to become leaders and innovators in the 21st century.

So how exactly do we teach children to not give up on a task, and instead be resilient? What do our counselors do each day to help our campers learn to be creative thinkers and self-directed problem solvers? Over the past few months I have shared in this blog some of the teaching methods that our amazing specialty staff use to create these important outcomes.

This week I am pleased to introduce James Manigley, the long-time head of Music at our summer camp in New Hampshire. When he is not at Camp James is a musician, composer and record producer in London. He has written music for bands and films, and is in a band that has toured throughout Europe. As you will read, James is extremely passionate about teaching both music and 21st century skills at summer camp. 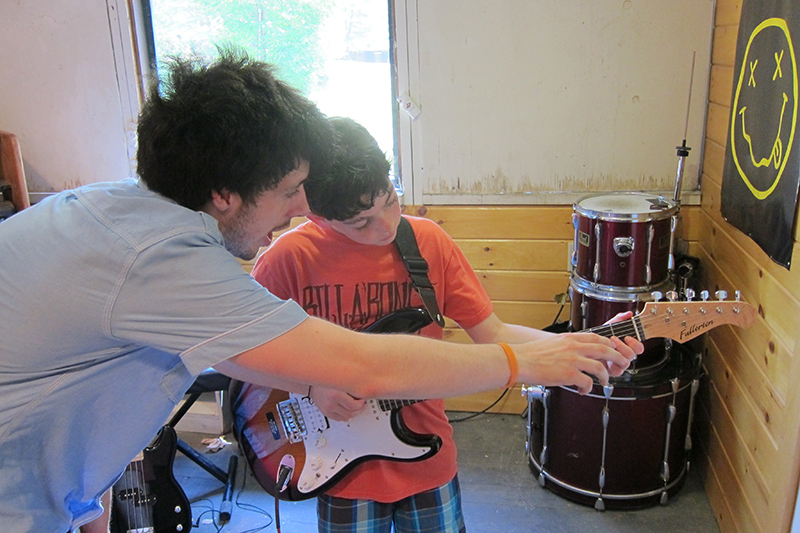 At Camps Kenwood & Evergreen I teach two things, Music and Non-Cognitive Skills. I remember thinking during the 2 weeks of training in my first year, “How can I teach both music and 21st century skills in a 45 minute activity period?” I was still baffled about how I was going to teach music to 340-ish campers in 7 weeks as well as put on a music festival (the famous K&E Hollowpallooza). As you could probably tell my head was spinning for most of the first 2 weeks.

So I decided to break these concepts down into the 4C’s (critical thinking and problem solving; communication; collaboration; and creativity and innovation), and then look at how I use them in the Music industry. I set Hollowpallooza as a target date for helping kids master these skills, and suddenly I had my plan for the summer. That has been my template for many years now.

Usually, during the first week I encourage the kids to start thinking about Hollowpallooza in concrete terms like “what they might perform” and “who they might want to perform with”. There are always a few campers who have formed bands or acts during the year (which is a great example of communication and collaboration) but for the rest of them arrive excited to participate, but otherwise without much direction.

New campers are often concerned that they don’t know how to play any instruments, but they quickly learn that if they are willing to put in just a bit of time and effort I can have them playing a few chords or banging out a basic 4/4 beat in almost no time. During each Hollowpallooza about 50% of the campers in bands had never played their instrument before the start of the summer. Think about the valuable lesson that they learn here: by practicing, working on a project with a group, and not giving up, in a short time they can produce something incredible and memorable! That’s what I want for every camper who visits my music studio at Kenwood and Evergreen.

Band practice is a great way to learn how to collaborate, communicate, think critically and harness your creativity!

When they come to my music lessons I talk to them about what songs they would like to perform and what instruments they would like learn or improve on. We then work out the different parts, get the lyrics and try to play the song from beginning to end, even if they don’t necessarily want to play the song for Hollowpallooza. It’s a great achievement for the group of campers to say “today I learned how to play Katy Perry’s song ‘Roar’ or ‘Cups’ by Anna Kendrick”. Or “today my friends and I played the entire song at the same pace, and the other kids who heard it said that they liked it!” Sometimes with certain groups of campers I focus on developing specific instrument skills (the most popular in our community being the drums). For beginners I start from the ground up, teaching them basic drum beats or simple chords. After that we develop those beats or chords into popular songs, and multiple campers then know different parts of songs, which typically leads to new bands forming for Hollowpallooza.

Throughout the summer, up until the big performance at Hollowpallooza, we work simultaneously on their music and four non-cognitive C’s skills. We teach independence, resilience, and leadership (i.e. a camper having to learn his part by himself before we play the song together; when a song or a camper’s part isn’t right yet, we keep trying until it’s ready to perform; or having someone to make sure everyone is aware of the songs arrangement and to make sure everyone is present at rehearsals.

In teaching music I like to make sure the campers take away a lot more than just learning a song or two. I want the campers to learn how to collaborate and form a band. While being in a band together they learn that it’s about more than just performing. It’s all about communicating and compromise while also working towards a collective goal. As an example, towards the end of a song everyone in the band needs to know certain signals and cues to know when to stop playing. There’s always that chance that there will be a call for an extra guitar solo! I encourage the kids to rehearse as much as they can during their free time at Camp. It’s a great way of helping them develop their communication skills by arranging their band for rehearsal. When it comes to performing a song I also like every band to be creative with how they make it their own sound, either arranging the song (or part) in a different style, deciding on a dress code for the band, creating a dance routine or something as simple as coming up with an awesome band name (which is sometimes the most important thing).

Problem solving is probably the most common skill we develop every day in the music room. In one group of campers we might have 3 drummers interested in playing on one song, so I propose these questions to them: do we create three separate parts for the drummers, or do we add a percussion section to the song to accommodate multiple drummers? These challenges are a great way to get campers to think differently about a song and solve little problems that you face everyday as a musician. And it’s not just about problem solving. Being in a band teaches you that you either effectively communicate your ideas to others, or things get ugly pretty fast. You need to learn how to share your thoughts and ideas in such a way that you can help your group come to a peaceful consensus. That’s a life skill you will need in whatever career you pursue!

These 21st Century Skills were never taught to me during my formal education, and I feel like I really missed out. It’s part of why I love teaching at K&E. I get to share these tools while helping kids develop their skills and passion for music. It makes me a very proud music teacher to watch all of the bands and performers rock out at Hollowpallooza, especially since I am able to look back to the beginning of the summer to see how much they’ve improved. As a musician and a teacher, I recognize how valuable these skills are for young people. Becoming more familiar with them has not only helped me teach music more effectively to the campers, but it has strengthened by my ability to collaborate and communicate with others as well. I am very much looking forward to another summer of teaching in the music room at K&E!

Here is a video newscast made by our camper reporters last summer during and after the Hollowpallooza concert.

Camps Kenwood and Evergreen is a 7-week brother-sister summer camp in NH. We teach 21st century skills like resilience, collaboration, critical thinking and effective communication to children who will be tomorrow’s leaders and innovators.

Learn How Kenwood and Evergreen
is Redefining Summer Enrichment