Tournaments and Trips at Our Brother-Sister Summer Camp in NH 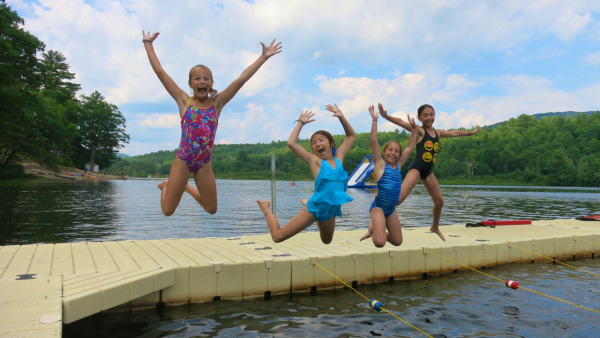 We had a lot of tournaments and trips going on today. Evergreen’s Juniper girls were having fun up in Maine on a white water rafting trip. Just after breakfast Evergreen’s Freshmen departed for their Pemi River Canoe trip. They fortunately have incredible weather tonight for their camping trip. With no clouds in the sky they appear to have a blanket of stars overhead. Evergreen’s 11’s, 13’s and 15’s tennis teams were also traveling today, as were Kenwood’s 10’s Tennis and 12’s Basketball.

Those in Camp today got right down to having fun immediately after breakfast. Each Junior camp unit had its morning meeting, and as you can see below the Kenwood Inters got in a few quick games of pingpong. 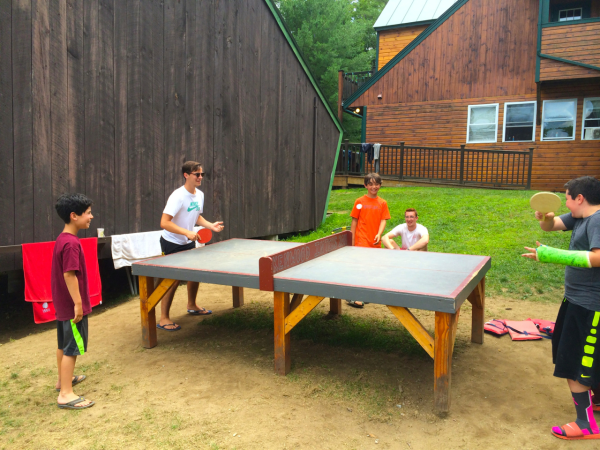 It was a very humid day, so down at the waterfront everybody decided to get in. These Sophomore girls were even covering themselves in mud to cool off (I also think that they also wanted to be silly, and they succeeded!). 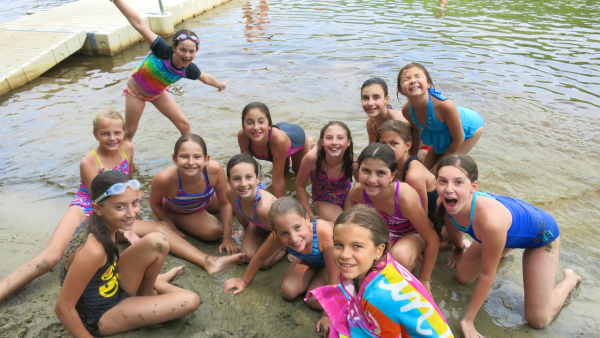 I watched yet another fantastic softball period in the Evergreen Junior unit. Today they were working on fielding and throwing, taking part in drills to improve both their work on ground balls, and their accuracy in making the throw to first. 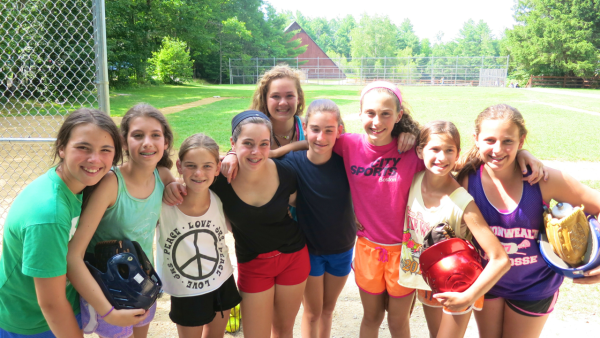 This was also a big day for mountain biking. All afternoon different groups of Kenwood Seniors were riding around campus and the trails that surround our property. 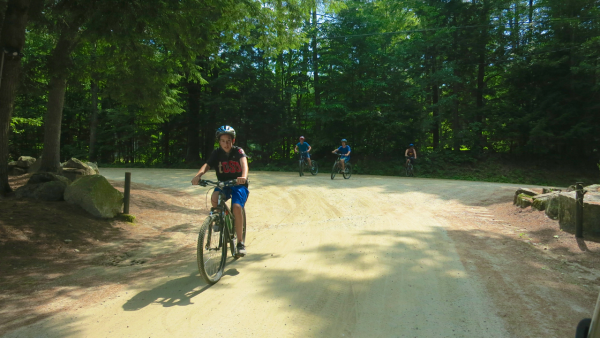 Today we also took part in one of our biggest tournaments of the summer: the annual Boys’ Tri-State Softball Tournament. Tri-State, as it is routinely referred to, is the oldest summer camp sports tournament in the nation, and it is hosted by K&E. Camps from far and wide travelled to play our oldest boys in a fast-pitch, round-robin softball event. This year there were so many Kenwood boys interested in playing, and we had so many talented players, that we actually were able to field two teams! 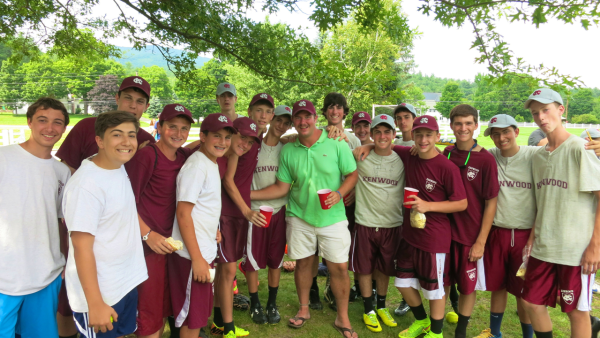 Some of the camps that participated today have twice as many boys as Kenwood. Some of them also had players sporting 5 o’clock shadows. Amazingly, none of it seemed to rattle our boys. Instead, they stepped onto the diamonds for their first game with a true sense of purpose. They were focused and they were determined. They communicated with one another before, during and after each play. They found energy when a teammate made a great play, and supported each other without ever getting down when a catch was missed. The first game went well for one of our teams, while sadly our other lost. 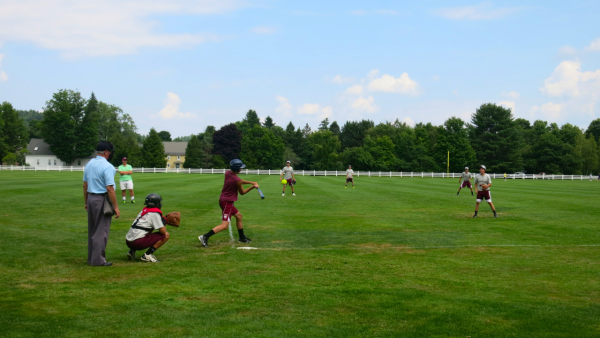 Unfortunately, our team in maroon shirts were never able to win any of their three games today, but they played with tremendous spirit throughout. Their final game was against our own Kenwood team in Grey jerseys, who were undefeated. Both teams played at full intensity, and yet walked off of each inning remaining true Kenwood brothers. It was really beautiful to watch. 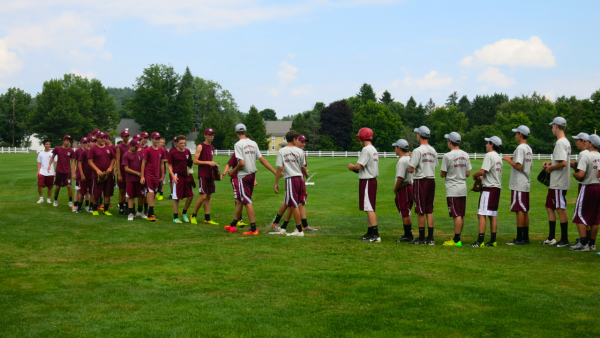 Our undefeated team went into the final game full of passion and excitement. After the first inning they were down 3-0. Then, due to some great hitting and strong base running, we came back 4-3. Our team held steady until the final inning, when the other guy’s bats suddenly started connecting. The final score was 7-4, with Kenwood coming second in the tournament. Our boys never lost their composure, even during the tough final moments of this great game. Instead, they held their heads high as they boarded the bus, knowing that they had given every ounce of energy that they had today. We are very proud of them and what they accomplished today. 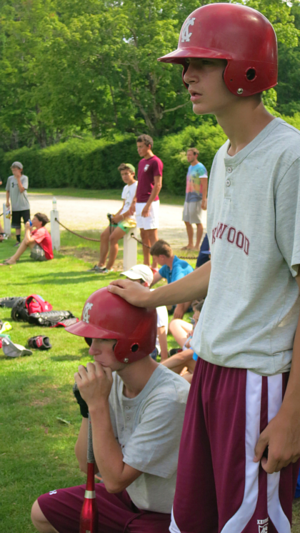 Back at Camp tonight Evergreen had it’s second annual Eurovision Songwriting Contest. This is yet another amazing Mia creation. Each lodge of girls gathered in their living room with specific instructions on what sort of song they were to create together. Over the course of an hour the girls strategized, collaborated and hashed out lyrics, rhythms and melodies that they then performed in front of the community. It was all great, silly fun, and a fantastic time was had by all.

In Kenwood tonight’s evening activity was Watermelon League, our intramural softball league. Campers ages 8-12, and their counselors, take part in slow-pitch softball games that are a ton of fun, and another way for the members of our community to get to know each other in a different way.

After all of the games were through, I stopped by the Kenwood Junior unit tonight for the annual telling of the Jon Levine Story. This tall tale was created and told to my bunk by legendary Kenwood counselor Evan Gordon in 1988. My peers and I immediately fell in love with this crazy adventure story that is loosely based on actual events (and by loosely I mean that someone once went to this camp who had the name “Jon Levine”. That’s pretty much where the similarities end). Since I became a counselor in the early 90’s I have only told the story once a year, and to the age group I was in when Evan made up the story. Every boy and counselor in the age group piled into bunk 12. Together they sat huddled in the dark, hanging on every word. They were an incredible audience, and at the conclusion of the story hooted and hollered in appreciation. I love that something my counselor made up on a rainy during 25 years ago is now the stuff of legend at our summer camp in NH!

Lastly, tonight we offer to you the third episode of the CampsK&E Newscast. There are new anchors this week with many new stories that they and their correspondents are reporting on. We hope you enjoy it!

Our campers are involved in amazing tournaments and trips almost every day of the summer. Learn more about our exciting program, and the amazing outcomes we create at our brother-sister summer camp in NH.