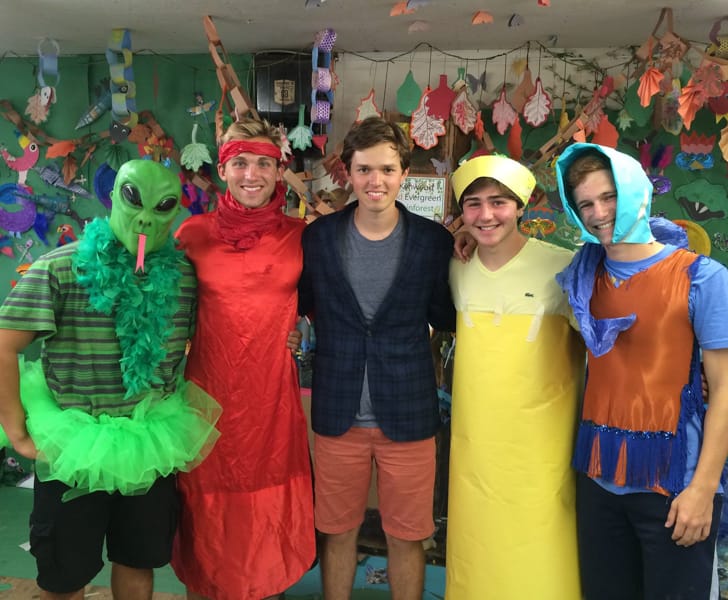 The culture of creative exploration and achievement

Camps Kenwood and Evergreen remains one of the most creative places I have ever inhabited. I am not talking about the ceramics, arts & crafts, woodworking, cooking, and filmmaking—although camp of course offers all of those. Instead, I refer to K&E’s culture of creative exploration, risk-taking, and achievement. No community I have been a part of has ever offered the same, and it ranks as one of the most formative elements of my K&E experience.

At its best, summer camp is a world built and sustained by young people—campers and counselors alike. Deliberately removed from many of the limits of the “real” world, camp can be a community imagined and brought to life by its young inhabitants. It can serve as a unique learning environment, teaching the lessons of community building, social responsibility, and civic commitment.

To be boldly creative is to be comfortable with the possibility or even likelihood of failure, and K&E provides just such an environment.Alexander

This is camp at its best, and many fall short. K&E, however, is special. It understands and embraces this vision of what a transformative camp experience can be. Instead of a highly-programmed, parent-choreographed daily routine, K&E hands young people the agency to be themselves and serve as intentional members of their own community. From the social contract each bunk writes at the beginning of the summer to the special rituals that draw each unit together, K&E empowers the campers (in collaboration with their counselors) to be the authors of their summer experience.

This approach is woven into the fabric of K&E’s culture. Perhaps nowhere is this more clearly on display than with the camp’s support of creative exploration and risk-taking. Whenever a camper or counselor has a new idea—however bold, wacky, peculiar, or audacious—K&E provides the space, resources, and support needed to pursue it. In lieu of asking “why?,” K&E is a community that asks “why not?”

For example, how many camps that you know of support campers as they rearrange their entire cabin to build epic forts—and call in ropes course specialists to help expand and fortify the structure? Or allow campers and counselors to turn their unit into the Wizarding World of Harry Potter, replete with a Tri-Wizard Tournament, Bertie Bott’s Every Flavor Jelly Beans, a sky-lantern ceremony, actual magic lessons, and a mission into the Forbidden Forrest (involving magical creatures and a fireworks display)? How many camps that you know of respond to incidents of mis-used humor among the youngest campers by running an entire workshop on the theory and practice of comedy? Or encourage cross-cultural learning by enabling campers and counselors from China to teach the Chinese flute to the whole camp community? How many camps that you know of build a special underwater car to drive out of the middle of the lake as part of a Color War break-out? Or stage a zombie apocalypse, featuring Hollywood-level special effects? How many camps that you know of include a substantive public policy debate as part of their year-end athletic tournament? Or organize a professional-caliber music festival where campers of all ages form rock bands and perform for their friends?

Whenever a camper or counselor has a new idea—however bold, wacky, peculiar, or audacious—K&E provides the space, resources, and support needed to pursue it. In lieu of asking “why?,” K&E is a community that asks “why not?”

Being a member of the K&E community can be like living in the land of Willy Wonka. It is an oasis of creative exploration and discovery, and not by accident. In addition to the support that comes from the camp’s leadership team, K&E also has a culture that celebrates the creative and entrepreneurial spirit, including the associated cycle of failure and success. Unlike the school environment, where perfection is often demanded and risk-aversion rewarded, K&E offers the opposite. It is community where people feel comfortable taking creative risks and know they will be supported no matter the outcome. To be boldly creative is to be comfortable with the possibility or even likelihood of failure, and K&E provides just such an environment. I am my most creative self at camp, and few things in life are as a satisfying and invigorating. For these experiences, and the insights that have come with them, I am immensely grateful.