So Much Going On This Morning 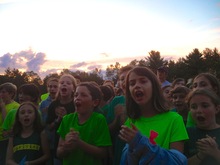 There was so much going on this morning at Camp! The Kenwood 11’s Soccer team was out at a tournament and came home with a 3rd place showing. The Kenwood 12’s Tennis team had all sorts of success, with campers placing in the semi-finales and quarter-finals, and another camper winning the entire event for anyone who lost their first match. We also had a precious 9-year old who actually beat his 12-year old opponent! Great work, guys! The Kenwood 3rd year seniors also spent the day at lifeguard training, and while it left them exhausted they apparently learned a great deal.

Evergreen’s Inters and Juniors enjoyed a fantastic day at the Whales Tale waterslides, while the Evergreen Seniors were at Weirs Beach for the morning and afternoon. Around Camp people seemed very happy to return to regular activities after a spectacular Big Weekend.

Tonight in Kenwood we had Junior Camp Capture the Flag (you should have seen how the boys celebrated when I announced that this would be tonight’s evening activity). At the last minute I came up with a new innovation in the game: in each quarter only a certain age group could play defensively. So in the first period all of the flags and jails were guarded by Freshmen, and in the second it switched to Sophomores. Very quickly it became clear that my experiment was successful, as it gave our younger campers more responsibilities during the first period, and more of an opportunity to try and run with the flag later on (while the bigger kids took over guarding their areas). I was thrilled at the outcome of this new idea, and how receptive our campers were to the change. I love how willing people are here to try something new.

Evergreen had its own favorite event tonight: Camper Hunt. Imagine the largest game of hide-and-go-seek that you’ve ever seen! At the start of the game campers rushed in pairs and trios around the campus, hoping to find the perfect hiding spot. If they got caught all was not lost: Evergreen plays this game with many rounds, so that everyone has more than one chance to outsmart the counselors!

In my most recent blog I lamented the untimely demise of my beloved laptop. Amazingly, by 11am today Apple computers had not only given me a new computer, free of charge, but had found a way to migrate all of my files from my damaged hard drive! So with that in mind I hope that you enjoy some of these images that I had meant to share with you last evening!

I wrote this paragraph about this video: